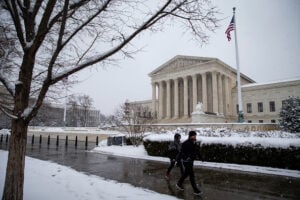 Today’s oral arguments in the affirmative action challenges against UNC and Harvard packed in a lot over the course of five hours. Unfortunately, very little of that content involved any legal or factual analysis. But what it lacked in judicial content, it more than made up in robed policy making and casual racism.

From distorting Justice O’Connor’s dicta that she hoped for a country that wouldn’t need affirmative action by 2028 into a sunset clause to musing that affluent Black people don’t face discrimination, the Court delivered the biggest hits in the anti-diversity catalog one after another without a miss.

It was truly the Midnights of white grievance.

The moment when I completed my personal BINGO card arrived when “viewpoint diversity” entered the conversation. At one juncture, Consovoy McCarthy partner Cam Norris pointed out that “Harvard is not diverse at all,” because only 9 percent of incoming students identify as conservative. A classic of the genre!

There’s a vague logic to this argument. To the extent schools to champion affirmative action as a tool to promote “diversity” as opposed to, say, “redressing past discrimination,” the underrepresentation of any slice of the American pie makes the place slightly less “diverse.”

On the other hand, this is stupid. At its core, viewpoint diversity posits that “not believing in climate change” is on par with facing the obstacles society throws at people based on race or gender or sexual orientation. In the famous admonition to judge people on content and not the color of their skin — viewpoint diversity begs that we not judge people on content either. It’s an appropriation of the rhetoric of justice to give more opportunities to right-wingers based on the fact that they’re right-wingers.

But it’s an effective hack. Justice Thomas at one point lamented that he had no idea what diversity meant because it “seems to mean everything for everyone.” That’s not exactly wrong… if one starts cynically diluting the concept ad absurdum.

Which is the whole point.

Joe Patrice is a senior editor at Above the Law and co-host of Thinking Like A Lawyer. Feel free to email any tips, questions, or comments. Follow him on Twitter if you’re interested in law, politics, and a healthy dose of college sports news. Joe also serves as a Managing Director at RPN Executive Search.