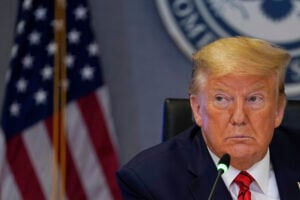 Every Donald Trump LOLsuit is like a 1L CivPro issue spotter, but his lawsuit in Florida state court against New York Attorney General Letitia James to stop her filing an enforcement action against him in New York state court is a wonder to behold. Yesterday’s idiotic filing against the Pulitzer Prize Board, whom Trump is suing in Florida state court for defamatory failure to revoke a prize, is a close second. But Trump v. James implicates sovereign immunity, so it takes top honors.

This is the lawsuit seeking to enjoin the AG from asking New York Supreme Court Justice Arthur Engoron to order Trump to hand over copies of his revocable Trust. Trump’s competent lawyer Chris Kise, the former Florida solicitor general who got shunted off the Mar-a-Lago documents case to the Trump Organization fight in New York, begged Trump not to file this suit, which was a pointless middle finger to the New York court.

And he was right! The case was immediately cited by AG James to bolster her argument in New York that the Trump Organization intended to move assets out of the court’s jurisdiction and thus required an independent monitor. And then she removed the Florida case to federal court, where it landed in the lap of Judge Donald Middlebrooks, who just dinged another team of Trump’s lawyers with the first round of sanctions for filing that idiotic RICO suit against Hillary Clinton, James Comey, and the DNC for conspiring to murder Donald Trump with the Mueller investigation. (Another strong contender for the CivPro gold!)

Mistakes were made. And they continued to be made this week by Trump’s lawyers from the St. Petersburg law firm Weber Crab Wein, who filed the Pulitzer suit, as well as this preposterous windmill tilt.

AG James already filed an opposition to Trump’s motion for a preliminary injunction on grounds of Bro, Do You Even Law? On Wednesday, Trump issued a response that indignantly insisted jurisdiction was right and proper because James was being sued in her personal capacity for tortious conduct directed at a Florida resident.

“James’ remaining arguments for dismissal all rely on her attempt to re-cast the Amended Complaint as an official capacity suit brought against the New York Office of the Attorney General (“OAG”) rather than an individual capacity claim against James for her unconstitutional behavior,” his lawyers huff. “James attempts to characterize Plaintiff’s claim as challenging the “Investigation” (Opp., p. 2) or the “NY Enforcement Action” (Opp., p. 6), however, it encompasses a far broader, sustained campaign by James to abuse office for personal gain at the expense of Plaintiff which was conceived and announced before James’ election to state office[.]”

How could Letitia James in her personal capacity move the court to kick loose the revocable trust agreement? Trump’s lawyers do not say!

But they pinky swear that, had James lost this election, Trump would still be suing her personally for the tort of shit talking him, and thus Florida’s long-arm statute definitely applies.

It is also true that Plaintiff was sued in the New York “enforcement” action by James in her official capacity. It is equally true that had James not been reelected in November, both pieces of litigation would have continued against her successor in office since the State of New York is the real party in interest in both actions. In contrast, Plaintiff here seeks relief against James in her individual capacity for unconstitutional behavior which violates the Constitution.

Unsurprisingly, the Attorney General has a different take. One that is grounded in actual law and civil procedure.

Mr. Trump commenced this action to interfere with the New York State Supreme Court’s exercise of jurisdiction in two ongoing proceedings where he stands accused of fraud and illegality in the conduct of his New York-based businesses in violation of New York law. This action is Mr. Trump’s second improper attempt to collaterally attack and end-run around rulings that have been issued by the presiding judge in the New York proceedings, Justice Arthur Engoron.

The AG opens her motion to dismiss reminding Judge Middlebrooks that Trump already had a second bite of the apple courtesy of Judge Brenda Sannes in Northern District of New York, who declined to enjoin the Attorney General’s investigation citing res judicata and Younger abstention, since Justice Engoron had already ruled that the inquiry was appropriately predicated. And since the investigation ripened into a sprawling civil enforcement action, Justice Engoron has already made several rulings which should not be disturbed under the Rooker-Feldman doctrine.

As for the supposed tortious conduct, the AG points out that “Mr. Trump’s being civilly investigated and sued for fraud is not tortious conduct by OAG, nor is OAG’s obtaining trust-related information pursuant to that lawsuit actionable ‘injury’ to Mr. Trump.”

Indeed, seeking a court order in a civil suit to disclose a document is definitionally an official act, and not something James could accomplish in her own right. And since she’s acting as agent of the state of New York, sovereign immunity clearly bars this stupid lawsuit. But even if it didn’t, forcing the Trump family to cough up the revocable trust paperwork is in no wise “supplanting, controlling, or monitoring the trustee and attempting to exercise or restrain the exercise of powers” such as would subject James to jurisdiction of the Florida courts.

But perhaps the most aggressively stupid part of Trump’s original complaint was his threat to seek damages of up to $250 million if James, acting in her prosecutorial capacity, goes ahead and asks the New York court to order disclosure.

“At the very least, Mr. Trump’s claims for money damages are barred by absolute prosecutorial immunity, which prosecutors enjoy for acts within the scope of their official duties, including actions ‘in initiating a prosecution and in presenting the State’s case,’” she argues.

The whole motion is good fun, and it will be even more fun if and when we get Rule 11 and/or § 1927 sanctions, which we absolutely should.