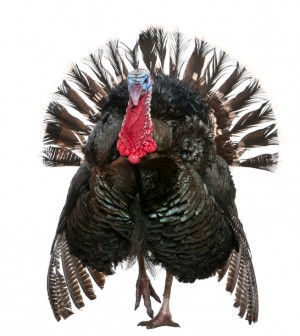 Since I live in a land where everyone, or almost everyone, gets an award for something, no matter how trivial, I am creating an award for the stupid, thoughtless things that lawyers and judges do. With an acknowledgement to the season, I am calling my award the “Headless Turkey” or should it be the “Heedless Turkey”? Whatever. I bestow this award (and no one is going to get a pardon like the White House turkey) on just a few of many deserving peeps. Selecting awardees is like shopping at Costco; the choices are many.

Do you think that lawyers and judges in hindsight ask themselves why they did the stupid, license-lifting, judge-admonishing, reputation-trashing things? What were they thinking?  They weren’t. They acted just like chickens — or in this case, turkeys — with their heads cut off.

Might as well start with a former Ninth Circuit judge who had the smarts to resign amid a sexual harassment scandal. Now he’s on the brief for the former president in his 9th Circuit case against Twitter, and I’m sure the Trump legal team thought it was a smart move to have this disgraced judge to appear before his former colleagues. Alex Kozinski and his family fled the repressive authoritarian Romanian regime in the early 1960s, and now he’s on the record advocating for a plaintiff who admires autocrats and wants to be one. Yeah, I know everyone deserves the best lawyer money can buy, but this, really? Hopefully the former judge will be paid, since Trump is well-known for stiffing his lawyers.

Everyone should agree that California lawyer (and failed coup advisor) John Eastman definitely deserves a Headless Turkey Award. Where to start? In his interview with ABC News anchor David Muir, Pence said that Eastman told him that he, the vice president, could overturn the election, even after Eastman admitted that his theory had never been tested in court. How would you like to argue that democracy should be overturned on an untested theory? Would this argument pass the “straight face” test? Appellate attorneys know what I’m talking about. Here’s just one example of Eastman’s self-immolation. So, a Headless Turkey to Eastman.

How about a Headless Turkey Award for this attorney for creative billing? How many hours are there in an Earth day? Twenty-four. There’s no way on Earth (pun intentional) that he could properly and accurately bill more than 24 hours in a single day (unless Daylight Saving Time was involved or he was traveling west across the International Date Line). But he did. Whoops! He was suspended for three years for the billing snafu, but he was disbarred for a separate undisclosed ethics violation. His conduct was not only heedless, but headless. So, he also gets a Headless Turkey Award.

Here’s an attorney who was arrested on a variety of felonious charges arising from the January 6 insurrection, which, according to many Republicans, was just “a tourist visit” to the Capitol. He’s now out on bond. What was he thinking? A Headless Turkey Award to this lawyer, John O’Kelly. How does that kind of conduct square with an attorney’s oath to protect and defend the Constitution? You tell me.

Dead men normally tell no tales, but in this case, the attorney wasn’t dead, even though the State Bar of California had received an email that he was. He previously had said that he had retired from practicing law and requested that the disciplinary matter be dismissed. Ignoring that request, he was still disbarred for misconduct, since bar investigators found that he was still alive and well and living at a new address. Oopsie. He gets a Headless Turkey Award.

And the mighty fall, just like the rest of us. The California Commission on Judicial Performance publicly admonished Justice Vance Raye of the Third Appellate District. The justice stipulated that he would retire forthwith to forestall an investigation into why his district was so woefully far behind in issuing opinions in cases that had been submitted for decision. (California has the 90-day rule; once the case is submitted, an appellate court has 90 days to issue its decision.) A Headless turkey Award to him too.

New York state has disbarred the two attorneys who pleaded guilty to throwing a Molotov cocktail at an empty police car during the George Floyd protests. Both will be sentenced within the next 30 days. Again, what were they thinking? Was it worth losing their licenses, their livelihoods? Obviously, they thought so at the time, but in hindsight, a different opinion? Headless and heedless turkeys to both.

And there aren’t enough Headless Turkeys in the world to award to Tom Girardi, finally disbarred here in California after amassing 205 disciplinary complaints against him over the past 40 years or so. An expert in skating on thin ice, he never fell through until a Chicago law firm — co-counsel on a major wrongful death case arising out of an airline disaster — had enough of his stalling and cried foul (pun intended) to the federal judge in Chicago overseeing the litigation. Girardi finally got flocked.

And on a serious note, this will be the first Thanksgiving since 2019 that families and friends will feel safe (more or less) gathering on this holiday. If we have learned anything during the past almost-three years, it’s that family and friends matter … a lot. Take time to show that they matter. It’s worth relinquishing some billable hours to hang out, to do what we have missed doing the past few years. It’s called Thanksgiving/Friendsgiving for a reason.

Jill Switzer has been an active member of the State Bar of California for over 40 years. She remembers practicing law in a kinder, gentler time. She’s had a diverse legal career, including stints as a deputy district attorney, a solo practice, and several senior in-house gigs. She now mediates full-time, which gives her the opportunity to see dinosaurs, millennials, and those in-between interact — it’s not always civil. You can reach her by email at [email protected].