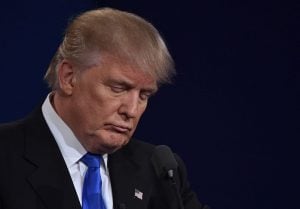 Safe to say US District Judge Donald Middlebrooks is tired of Donald Trump’s bullshit. The South Florida jurist just got through the first round of sanctioning Trump’s lawyers in that garbage fire RICO suit against Hillary Clinton and James Comey. And now New York Attorney General Letitia James removed that insane complaint Trump filed against her in Palm Beach County Circuit Court to federal court, landing on his docket.

Surely Trump’s new lawyers from the St. Petersburg law firm Weber Crab Wein will be on their best behavior, lest they find themselves on the pointy end of a Rule 11 motion. Right?

The AG already filed a motion to dismiss this dumb turkey, which purports to seek relief against her in her personal capacity to prevent her seeking judicial enforcement of an order to turn over the paperwork for his revocable trust. How private citizen James would go about accessing this document is unclear, and indeed all the exhibits entered into the record show communications with attorneys in the AG’s office. But that is a WTF for another day, because in the meantime, Trump moved for a temporary injunction to stop James accessing the disputed trust records.

Unsurprisingly, the court was not terribly receptive to Trump’s demand for so-called emergency relief.

The court went on to note that “it is not at all obvious, and Plaintiff cites no case law for support, that the Florida Trust Code was intended to reach government officials lawfully bringing enforcement actions for alleged fraud.”

Judge Middlebrooks further characterized the argument that James is being sued in her personal, rather than official, capacity as “plainly frivolous,” remarking that the complaint includes the same ranting “almost verbatim” about bias and improper prosecution that Trump included in his fruitless filings before New York Supreme Court Justice Arthur Engoron, as well as his dumb, doomed attempt to get a New York federal court to intervene and make the AG stop investigating him.

Calling the claim of irreparable harm from having his estate plan disclosed “quintessentially speculative,” the court points out that Trump’s attorney Alina Habba, of the aforementioned sanctions motion, has proposed handing over a redacted version of the trust documents without the estate planning provisions, and the AG has apparently accepted the compromise.

Finally, the court observes that “The Trump Organization has already been found guilty by a New-York jury of several counts of tax fraud…. To now impede a civil Enforcement Action by the New York Attorney General would be unprecedented and contrary to the interests of the people of New York.”

TL;DR? The best time to rethink this lawsuit was November 2 before vomiting it onto the docket in Palm Beach County. The second best time is now.