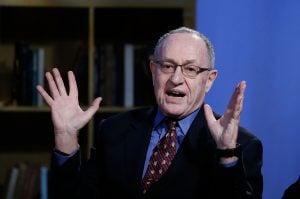 Alan Dershowitz is ringing in the New Year the way he rang out 2022 — with a big steaming bowl of hot nuts.

The 84-year-old Harvard professor is hoppin’ mad about a sanctions order leveled against him and two other lawyers for their role in filing a garbage election law complaint on behalf of failed Arizona gubernatorial candidate Kari Lake. The case was a manifestation of Pillow Puffer Mike Lindell’s promise to “sue all the machines,” with the plaintiffs seeking an order enjoin the use of electronic voting machines and tabulators in all future elections. Claiming that they were both untested and unreliable, the complaint demanded that all votes be cast on paper ballots.

US District Judge John J. Tuchi dismissed the case for lack of standing, holding that the plaintiffs had “articulated only conjectural allegations of potential injuries that are in any event barred by the Eleventh Amendment, and seek relief that the Court cannot grant under the Purcell principle.” And in his order granting the Maricopa County defendants’ request for sanctions, he was even more scathing, excoriating the plaintiffs’ counsel for failing to undertake “the factual and legal pre-filing inquiry that the circumstances of this case reasonably permitted and required.”

In point of fact, every vote in Arizona is cast using a paper ballot, something which should have been readily apparent to the attorneys, who cited the hand recount of paper ballots after the 2020 election as “proof of concept” — despite the fact that it took six months and cost millions of dollars. And there is extensive testing of the voting machines, both before and after the election.

“Plaintiffs and their experts may be entitled to opine about the sufficiency of the testing that Arizona’s machines undergo, but they are not entitled to allege that no such testing takes place,” Judge Tuchi wrote, before finding attorneys Andrew Parker, Kurt Olsen, and Alan Dershowitz liable for $141,690.00 in attorneys’ fees and costs.

Well, Dersh is mad as hell, and he’s not going to take this lying down!

Or actually, he is going to take this lying down, since, according to an affidavit filed last week, he has Covid and “medical conditions – I have had three strokes.” Sure his name appears on the briefs and he entered an appearance pro hac vice. But he was just a consultant on “constitutional issues,” and thus “he never reasonably expected, based on the limited nature of his appearance, to be at risk of personal liability.”

His role was expressly limited to the potential for future abuses based on the unwillingness of voting machines companies to disclose the inner workings of their machines. Mr. Dershowitz is not an expert on voting machines or the 2022 Arizona election, but he is an expert on constitutional law; and accordingly, he limited his advice to his area of expertise.

“Mr. Dershowitz believed and still believes that this is a profoundly important issue that goes to the heart of future voting integrity,” he goes on, adding that “He is a liberal Democrat who has almost never voted for a Republican candidate. He strongly believes that the 2020 election was fair and resulted in the correct outcome.”

For the record, Dershowitz’s supposedly “constitutional argument,” which is grounded in due process and equal protection, has never been recognized by any court. Indeed, as Judge Tuchi noted in his dismissal, it’s been explicitly rejected by the Fourth, Eighth, and Ninth Circuits, as well as by the Southern District of New York. Not to mention that it rests on the false premise that Arizona’s voting machines are both unreliable and untested. And not for nothing, but an eminent constitutional scholar should have more than a passing understanding of the Eleventh Amendment and what it takes to qualify for Article III standing.

Dershowitz also appears to be accusing his co-counsel of … some kind of impropriety with regard to his signature:

He does not recall authorizing his signature to any of the filings in this matter that do not list him as “of counsel” and the name of his consulting firm. All filings were made through a law firms account, and no filings were made through Mr. Dershowitz electronic account.1 It can be seen on a number of the filings in this case that they even identified Mr. Dershowitz’s old address in Cambridge (and did not correctly identify the name of his consulting firm or repeat that he was “of counsel”); Mr. Dershowitz did not actively participate in or sign any of those filings, or else he would have noted that information as incorrect.

In an application for an order to show cause, Dershowitz demands a hearing, in which he will prove that he had no role in drafting the motions that bore his signature. And in an accompanying declaration, he insists that he has “already suffered greatly and disproportionately from the sanction order” because Law & Crime called him the “lead lawyer” in the matter.

“Not only am I not Lake’s lead attorney, I have never met her and have no retainer agreement with her. My consulting agreement is with one of the lawyers,” he huffs.

Well, it’s a bold strategy, Cotton. It didn’t pay off for Lin Wood, when he tried to escape sanctions in the Michigan Kraken suit by claiming he’d only signed on in case it ever got to trial, but maybe there’s an exception for cranky octogenarians who just like to put their names on garbage election suits for giggles.

And speaking of garbage, we can’t help but notice that Dersh is represented here by Jack Wilenchik, the Phoenix attorney who coordinated the fake electors scheme with the Trump campaign and Arizona GOP chair Kelli Ward.

“Kind of wild/creative — I’m happy to discuss,” Wilenchik wrote to a team of Trumpland attorneys in a December 8, 2020 email reported by the New York Times. “My comment to him was that I guess there’s no harm in it, (legally at least) — i.e. we would just be sending in ‘fake’ electoral votes to Pence so that ‘someone’ in Congress can make an objection when they start counting votes, and start arguing that the ‘fake’ votes should be counted.”

For a stalwart liberal who believes that President Biden won the election fair and square, Alan Dershowitz sure has some … interesting friends.